Well a rather steep learning curve for me over the weekend.

Some time ago, a conversation with Alec from Prize Motorsport led to me booking the Hyundai Coupe car for Silverstone. I had experience of FWD with the Proton and Cyborg, even the 4WD Pulsar had FWD tendencies, how hard could it be

We did the handover/walkround on Saturday and Prize Motorsport offered to get the guys to make any changes I wanted, I was happy to drive the car as is, with just some tyre pressure advice.

Naively I choose not to do the Test Day or Nippon and my first time out of 1st gear was rolling out onto the track for qualifying.

I had given myself 2 goals for the weekend;
1) Dont Bin Alecs car
2) Dont get in the way of other drivers who are regular peddlers in their cars. 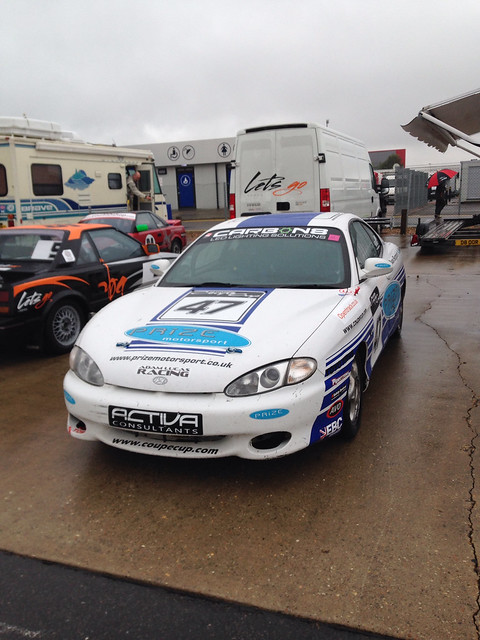 Qualifying was character building, or destroying, depends on your viewpoint. I was a long way off finding the limits of the handling and the brakes in the wet, this resulted in a back row start for R1, long time since I had that view. 100% my fault and not the car.

Race 1
Not a lot to report, though I went from 36th to 29th this was through other drivers falling off or breaking down, rather than overtaking moves.

The track had dried and I was on the outside, with no standing start practice I ended up with too much wheels spin and dropped a couple of places. I ran round the outside at Copse and planned to do the same at Maggots/Beckets, coming round the last part of the corner onto Wellington Straight, the car in front moved and I was confronted by several dead/wounded cars and debris.
I ran over the stricken Hyundai's bumper cover, for the next few laps checking the temps to make sure nothing had hit the rad.

Managed to catch and pass Steve Hennessy in #64 who had been goading my qualifying result earlier. I went from 29th to 15th overall and finished 6th in the Hyundai Coupe Cup.

We came into this weekend not knowing what to expect. Having never raced with the MR2 Championship, we had heard good things. (I did come close to joining in 2009).

We arrived Friday afternoon and squeezed ourselves into a space as there were private cars all over the paddock, we were soon settled in and the weather was great.

We made the most of watching the racing on the Saturday, but it was soon Sunday and our turn. Dave Hemingway was the other MK1 that had ventured into Wales and we went out round qualifying together, Dave soon let me through as he had clutch issues. 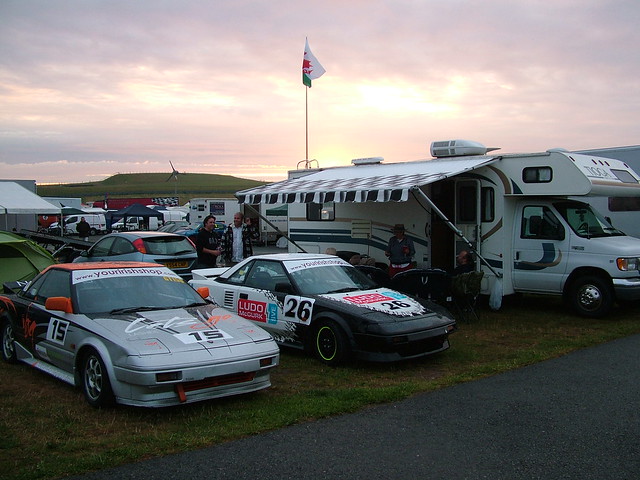 Made quite a good start, but more importantly kept DH behind me. At the end of lap 1, a recovering Mk2 thought I would be out of the way quicker than I was and I took a hit,  fortunatly I recovered the spin before an interaction with the Pitwall could take place. 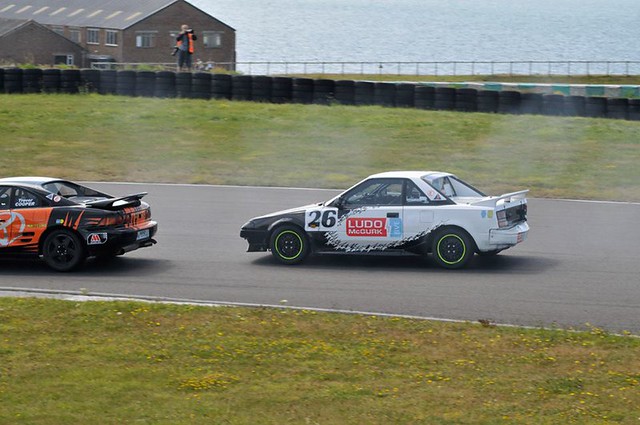 The Mk1's are suited to Anglesey, though it was frustrating to have the mid field Mk2's we were fighting with, storm off on the straights and then we are tripping over them in the corners.

DH was chomping at my bumper on several occasions, but I was able to keep him behind to finish 1st in class.

Race 2
Similar story of us chomping at the bumpers of the Mk2 in the corners and then being left on the straights.
Only incident was when a car that had passed me along the straight up to rocket, I went round the outside of him which he left me room, a slower car in front appeared to cause him dive into the space I was heading for and stepping on the brakes, giving me nowhere to go (that's how it appeared to me) 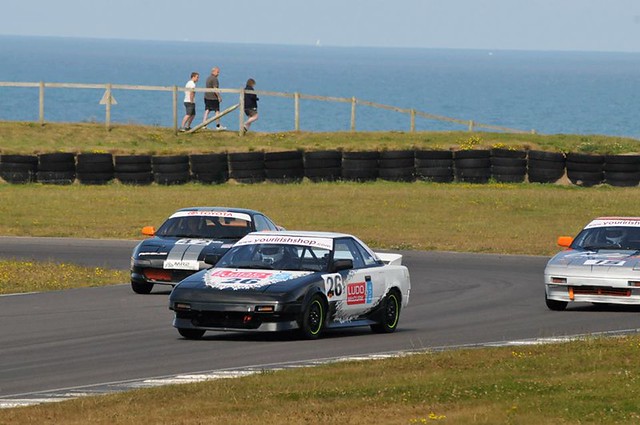 Damage aside, we really enjoyed racing with the 750MC.

Despite the low numbers of Mk1's we still got awards which was a nice recognition. I may just have to do a few more races with them....

Arriving on the Friday afternoon to make our usual [sic] weekend away, we were past gate 1 hurdle, only to be held outside the paddock with the Bentley Boys as there was a Mazda promotion on, shortly after we were directed in past gate 2 into the paddock and parked up near Redgate.

We were soon settled in and had a wander down to chat with the Bentley Boys, one of which we kept being overtaken by on the motorway, but we never seemed to overtake him, it was like Groundhog Day.
Tony (Burpspeed) & Helen arrived an hour or so later and parked up nearby.

Saturday started off sunny, but then the Thunder & Lightening started, just before the Bentleys went out, full credit to them they were sliding about and giving it some through Redgate. By mid afternoon the sun was out and shorts were the order of the day.
Steve Hennessey managed to get into the paddock while the barrier was up, only to be closely followed by a security car, a quick word and an offer to show him a Saturday Paddock Pass and tickets seemed to satisfy him.

A while after, with an almost empty paddock Sunday competitors were allowed in and Dave Hemingway slurred himself alongside.

Due to the disjointed entry to the paddock, there was only 6 of us for a track walk, stocked up with fluids and the sun beginning to set we ventured off.

Sunday morning, up early for sign on which was the most disorganised I have ever witnessed, though scrutineering was super efficient.

Out for qualifying, the car has not turned a wheel in anger since Donington last year, though I had gone through the car, a vibration through the wheel and brake judder, was an issue, but not bad enough to retire. I was quite pleased to be keeping DH in sight; little did I know that he was driving his 90bhp economy car

Back in the paddock I checked the car and found nothing loose/hanging off, with Service and Sport in attendance I asked them to check the wheel balancing and one was a country mile off.

2 YouTube links per race, I was using my regular camera, but I wanted to use the video function on my IPhone Harrys lap timer too. I am a bit torn, I like the overlay and the info & quality is great for the money, but I do like my old camera with old school rear view mirror to see what is going on behind.

The stand-alone race 1 had me starting 12th overall and 3rd of the Mk1 MR2s
I got a reasonable start, but not as good as Colonel Mustarde who came through at Redgate and Adam Shale (Hyundai) chomping away at my back bumper. (Wheel wobbles now gone)
Though I could get the occasional look, The Colonel was not giving a quarter and making his car very wide.
A scruffy 2-into-1 does not go at the Esses at the end of lap 4 cost us both time and Adam was tasting blood, getting alongside down Craner and out braking me for the pass, I was back on the throttle sooner and we ran side by side up to and through McLeans and I was back ahead by Coppice.
The Colonel was a few seconds up the road now and he took a while to reel in, back on his tail by lap 7, I had a run when he appeared to be a little wide at McLeans and I may have returned the squeeze at Coppice The remainder of the race was pretty lonely as I pulled away, the last lap down Craner the car felt a bit loose, but I put it down to poor placement, until I saw Colonel Mustarde spinning off a few seconds behind, so possible a bit of crap on the track.
Great 3 way battle, no contact, how it should be.

Back in the paddock I found the downpipe was loose so with parts help from DH and Nath I cobbled a repair.

With the starting positions done by 2nd best Q time and not finishing position, I had The Colonel on the row behind; I was joined alongside by ex MR2 peddler, Jeff McCall in his 206GTi.
Lights out, a reasonable start, Jeff had a better one and plonked himself in front of me before Redgate. Exit of Redgate, a quick check in the mirror and I dont seem to be under attack, then a bit of blue appears in my peripheral vision  You got to be ------ kidding me, The Colonel is having a go, down Craner side by side, round the Old Hairpin, he is still there
Managed to edge in front before McLeans, I am sure I could hear him swearing
I caught up with Jeff in the 206GTi, I was quicker in places, but good placement by Jeff kept me at bay, and on the straights I was no match for him.
Jeff seemed a bit perplexed by my social waving at him while getting a draft down the back straight and totally ignored my Vulcan Salute later on.
Another great clean race, downpipe loose again, time for a good dose of looking at.
Came home 3rd of the MR2s and possibly even 3rd in Class !!